Anna-Liisa Bezrodny was born in Moscow, to a distinguished family of musicians. She is currently in great demand as a soloist, recitalist and chamber musician all over the world, receiving praising critics about her performances around the globe.
Anna-Liisa began her violin studies already at the age of two with her parents. At the age of nine, she began her studies at the Sibelius Academy in Helsinki, Finland, in the class of her parents, Prof. Igor Bezrodny and Prof. Mari Tampere-Bezrodny. Her later years took her to London, resulting in winning the most prestigious award at the Guildhall School of Music and Drama in 2006 – the Gold Medal –, previously won by masters, such as Bryn Terfel and Jaqueline du Pre.
Anna-Liisa’s repertoire ranges from baroque to contemporary music, giving world premières to several pieces, including those written by Estonian composers. The most recent of the latter was written by and dedicated to Anna-Liisa by Rein Rannap – “Cantilena” for Violin and Orchestra. In the near future, Anna-Liisa Bezrodny’s plans include recording and premiering Timothy Dunne’s Violin Concerto “Ribbon”, dedicated to a young violinist-girl who died tragically in a helicopter accident.
Over the years Anna-Liisa has appeared as a soloist with orchestras at most prestigious concert venues in the world, such as Royal Festival Hall, Barbican Hall, Wigmore Hall, Konzerthaus Berlin, Cologne Philharmonie, Cadogan Hall, Finlandia Hall, Estonia Hall, St. Petersburg Philharmonic Hall, Moscow Conservatoire Great Hall, as well as Small Hall and Rakhmaninov Hall, and countless others.
Anna-Liisa has worked with outstanding maestros, such as Leif Segerstam, Nikolay Alekseyev, Eri Klas, Paavo Järvi, Olari Elts, Sian Edwards, Sascha Goetzel, Juha Kangas, Mihkel Kutson, Robin O’Neil, Arvo Volmer, Paul Magi, and many others.
As a very devoted chamber musician, Anna-Liisa has collaborated with some of the most outstanding musicians, e.g., Ivry Gitlis, Ida Händel, Liana Isakadze, Alexander Rudin, Peeter Laul, and others.
She plays extensively with the renowned pianist Ivari Ilja (pianist to Dmitry Hvorostovsky), with whom she recorded her debut album (ALBA RECORDS), gaining an extremely praising response from all over the world.
The past seasons have taken Anna-Liisa Bezrodny to perform with orchestras, such as the London Philharmonic Orchestra, Moscow Symphony Orchestra, Zurich Chamber Orchestra, Helsinki Philharmonic, Turku Philharmonic, Gewandhaus Leipzig, Estonian National Orchestra, Tallinn Chamber Orchestra, Riga Symphony Orchestra, Georgian Chamber Orchestra, Vilnius Philharmonic, Pecs Philharmonic (Hungary), Jena Philharmonic, and countless others.
Anna-Liisa is the recipient of numerous awards and prizes, for example, winner of the Special Prize of the Rotary Club, winner of the Ian Fleming Charitable Award of the Musicians Benevolent Fund (London), winner of the Martin Musical Scholarship Award (London), Hattori Foundation and Myra Hess Trust prizes, Ricci Foundation Winner 2009, Young Artist of the Making Music Foundation 2009, Heifetz International Violin Competition, Brahms International Competition, etc. In 2005, Anna-Liisa Bezrodny was awarded the PROMIS Award for Talented Young Musicians given out by the London Symphony Orchestra. In the same year she received the Honorary Prize from the Pro Musica Foundation in Finland. Most recently, Anna-Liisa was awarded the honorary Musician of the Year Award by the Estonian Cultural Foundation, for her internationally prosperous and productive concert activity.
Anna-Liisa’s playing has been heard on several occasions on the Finnish and Estonian National TV-s and National Radios, NBC and BBC Radio 3 in the United Kingdom.
In late 2010 Anna-Liisa released another CD of Eino Tamberg’s (Estonian composer, 1930-2010) Violin Concerto. It was done in collaboration with the Theatre Vanemuine (Tartu, Estonia) and maestro Mihkel Kütson, to celebrate the composer’s 80th anniversary.
Most recently Anna-Liisa released a DVD recorded for the Estonian Record Productions (ERP), featuring Haydn’s and Mozart’s Violin Concertos, and gaining great critical acclaim. The DVD is dedicated to her late father, violinist and conductor Igor Bezrodny.
In addition to her busy solo career, since 2007 Anna-Liisa has been teaching at both the Estonian Academy of Music and Theatre and the Guildhall School of Music and Drama, and she is very passionate about the music education of future generations.
Anna-Liisa Bezrodny currently plays on an Amati violin, kindly on loan from the Finnish Cultural Foundation. 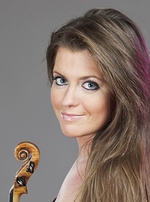