At the 2017 Tallinn Winter Festival, a piano trio named Hemeīs was born, made up of three outstanding Estonian musicians. In the time of an independent Estonia, very few sustainably active chamber groups have been founded, which is why we at PLMF do all we can to make sure that trio Hemeīs remains in our music scene for years. The reaction to their first performances has been excellent.

In 2018 they will have thier first tours abroad, including performances in Helsinki, at the Beethoven Festival in Warsaw and EuropFest in Bucharest.

At the 2017 Tallinn Winter Festival, a piano trio named Hemeīs was born, made up of some of todays most outstanding Estonian musicians. The reaction to their first performances has been excellent and as in the time of an independent Estonia, very few sustainably active chamber groups have been founded, trio Hemeīs aims to remains on the international music scene for years. In 2018 they will have thier first tours abroad, including performances in at the Helsinki Virka Gallery, the Beethoven Easter Festival in Warsaw and the EuropFest in Bucharest.

is one of the most distinguished violin players. S. Kuulmann has finished Tallinn Music High School and Estonian Academy of Music and Theatre, (EAMT, Prof. Tiiu Peäske). She has furthered her skills in London Guildhall School of Music and Drama and Düsseldorf Robert Schumann Hochschule in the violin class of maestro David Oistrahh’s student Prof. Rosa Fain. Her playing has been guided by, among others, professors Igor Bezrodny, Dmitri Sitkovetsky, Michaela Martin, Pavel Vernikov, Yfrah Neaman and Jüri Gerretz and her studies have been supported by Corporation of London, British Council Baltic States, Deutscher Akademischer Austauchdienst and Cultural Endowment of Estonia. S. Kuulmann-Martin is the laureate-prize winner of the H. Eller Violin Competition as well as many other competitions, she has performed as a soloist and a chamber musician in many European countries and in Scandinavia. She has received special recognition for playing Estonian composers’, especially E. Tubin’s works. She has been the first one to perform such pieces in Estonia as Lutoslawski Partita, Berio Sequenza VIII, Virkhaus Violin Concerto No. 2, Bizet-Waxman “Carmen-Fantasia” etc. Her repertoire includes most of the major violin concerts, sonatas and virtuoso pieces from baroque to contemporary. S. Kuulmann-Martin has done several recordings for Estonian Public Broadcasting (EPB), including Sibelius Violin Concert with the Estonian National Symphony Orchestra. In cooperation with ERR and Estonian Record Productions many CD-s have been completed, the last one in 2012 featuring Eduard Tubin’s violin music with pianist Marko Martin. S. Kuulmann-Martin is a scholar of The Association of Estonian Professional Musicians, Cultural Endowment of Estonia and PLMF since 2007. She received her PhD of musical interpretation from the EAMT in 2014 (Prof. Mari Tampere-Bezrodny) and she is also working there as Assistant Professor.

was born into a family of musicians and is one of Estonia’s most talented cellists. He studied at the Sibelius Academy in Helsinki (Prof. Hannu Kiiski and Heikki Pekkarinen) and received his B.A. and M.A. degrees from the Estonian Academy of Music and Theatre (2008, 2010; Prof. Peeter Paemurru). Andreas has won the 1st prize and Grad Prix at the International Contest-Festival «Renaissance» in Armenia (2013), the 1st prize at the ESTA Estonian National Competition of Young Violinist and Cellists (2004) and the 3rd prize at the Augusts Dombrovskis International Competition in Riga, Latvia (2002). He was the laureate of the Estonian Young Performers Competition Con Brio (2008) and the International Cello Competition in Liezen, Austria (2000). In addition, Andreas has been awarded the «International Holland Music Session” summer academy scholarship (2009 and 2010) and the PLMF Marje and Kuldar Sink award «Young Musician 2011». Andreas has participated in numerous master classes (F. Helmerson, D. Geringas, M. Ostertag, N. Ullner, M. Ylonen, M. de Oliveira Pinto, A. Ivashkin, J. Goritzki ect). In 2007 Andreas Lend was chosen to take part of the European Union Youth Orchestra (chief conductor Vladimir Ashkenazy) and between 2004-2014 was a member of the Estonian National Symphony Orchestra and the C-JAM cello quartet. Today he is a member of the Estonian National Opera Orchestra, Prezioso String Quartet and Trio Hemeīs. Andreas has performed as soloist and chamber musician in many different countries, during the past years among others at the Tallinn Chamber Music Festival, Järvi Summer Festival, Rapla Church Music Festival (all in Estonia), Festival O/MODƏRNT (Sweden), Kuopio Historical Keyboards Festival (Finland), Festival de Valle d’Itria (Italy), PagArt Festival (Croatia), Grieg in Bergen Festival (Norway), Baltic Neopolis Festival (Poland), Pažaislis Festival (Lithuania). In the past seasons he has toured as soloist with the string orchestra Camerata Nordica and Sinfonia Cymru. In the summer of 2017 began Andreas’ cooperation with Baltic Neopolis Virtuosi with extencive touring through 2017/18.

graduated from Tallinn Music High School and Estonian Music Academy. In 1993 he won the 1st prize at the National Pianists’ Competition dedicated to the 150th anniversary of Edvard Grieg. In 1994 he won the National Pianists’ Competition, the Competition For Young Interpreters “Con Brio” and was the grantee of Eesti Kontsert during the season 1994/95. In 1995 he received the prize of the youngest finalist at the International Schubert Competition Dortmund. Ralf has performed as a soloist with most of the Estonian orchestras and given recitals. He has worked with the following conductors: Eri Klas, Paavo Järvi, Olari Elts, Arvo Volmer, Anu Tali, Tõnu Kaljuste to name a few. His recitals concentrate mainly on the works of Schubert, Beethoven and Chopin. Ralf Taal is also a sought after partner for many vocalists and instrumentalists, including Mati Palm, Ain Anger, Pille Lill, Helen Lokuta, Monika-Evelin Liiv, Indrek Vau, Oksana Sinkova, Andrus Haav and many others. Currently Ralf Taal is a teacher at the Estonian Academy of Music and Theatre and at the Tallinn Georg Ots Music School, and he has worked as a pianist-repetiteur at the Estonian National Opera (1998-2014). In 2011 he won the Annual Prize of the Estonian Cultural Endowment. 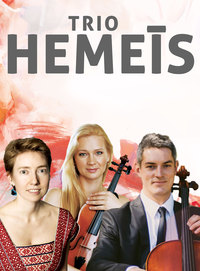