“From the first moment I heard her I realized that there was an uncommonly talented violinist, with individuality, temperament, performing personality and imaginative musicality…” — Professor Yfrah Neaman

Sigrid Kuulmann is a Laureate of the Heino Eller International Violin Competition and has been awarded the Neeme Järvi Prize for her performances of music by Eduard Tubin. She has studied with Professors Tiiu Peäske, Yfrah Neaman and Rosa Fain in Tallinn, London and Dusseldorf.

Sigrid has played as soloist with conductors Neeme Järvi, Andres Mustonen, Tõnu Kaljuste, Jüri Alperten, Nicholas Smith, Gregory Rose, Andrei Tshistiakov, Mikhail Leontiev, Nikolai Aleksejev and others. She was the first violinist in Estonia, who performed rare and new repertoire such as the Partita by Lutoslawski, Sequenza VIII by Berio, Violin Concerto by Virkhaus, Carmen Fantasy by Waxman and many other pieces.

Also see Sigrid Kuulmann performing in 2013 at the Opening Concert of the Estonian National Orchestra in HERE. 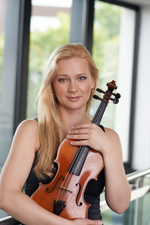