Neeme Ots was born in Tallinn and started to play the trumpet at the age of six under the guidance of his father Aavo Ots. In 2007 N. Ots joined  the Sibelius Academy, graduated in 2011 with a Bachelor degree. As of autumn 2011 he has proceeded there with his Master studies with Simo Rantanen. Last year he studied through the Erasmus program with prof. Enrique Rioja-Liz in the Madrid Conservatory. N. Ots has won several prizes at national and international competitions and has attended the master classes of Neeme Birk, Manuel Blanco Gómez-Limón, Adan Delgado Illada,Reinhold Friedrich, Maurice André, Johann Gansh and others. He has performed as a soloist with the Tallinn Chamber Orchestra, the Polish Chamber Philharmonic Orchestra and many others and has participated as principal trumpet in several prestigious youth orchestras: World-wide  Youth Brass Band, German-Scandinavian Symphony Orchestra, Baltic Youth  Symphony Orchestra and the Symphony Orchestra of Sibelius Academy. He has performed with the above mentioned orchestras at the Abu Dhabi Emirates Palace, at the Finlandia-Talo and Musiikkitalo in Helsinki, at the Berliner Philharmonie and several other concert halls of Europe. N. Ots has collaborated freelance several times with the Spanish National Orchestra, the European Royal Ensamble and the Madrid Philarmonic Orchestra. He has also performed at the International Trumpet Days in Tallinn, Tallinn Music Week and in the Estonian Concert Agency´s project “Young Talents”. 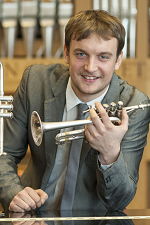