Irina obtained her Master of Music degree in Estonian Academy of Music and Theatre and the Sibelius Academy in Finland. In addition to piano she has studied the harpsichord and fortepiano. As a harpsichordist Irina has been a laureate of the Prague Spring competition in the Czech Republic (2005) and as fortepianist from the Festival van Vlaanderen competition in Bruges, Belgium (2004). In 2007 she received the prestigious Borletti-Buitoni Trust Fellowship Award.

See also a video made by the Estonian Music Development Centre in 2012 in http://www.estonianmusic.ee/projekt/klassikalise-muusika-promovideod/interpreedid/zahharenkova. 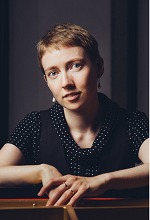