Marko Martin began his music studies at the age of 8 at the Tallinn Music Secondary School and at the age of 15 won the 1st prize at the International Pianists’ Competition held in Czechoslovakia, repeating the same achievement a year later in Ukraine. In 1993 he continued his studies at the Estonian Academy of Music and Theatre (EAMT) with Prof. Peep Lassmann and the same year won the 1st prize in the Vitols international pianists competition in Riga. In 1996 Marko Martin was awarded a scholarship to continue his studies at the Guildhall School of Music and Drama in London. In 1998 he won the 4th prize in the Gina Bachauer International Piano Competition in the USA. Marko Martin has played as soloist with the London Philharmonia Orchestra, Calgary Philharmonic Orchestra, Estonian National Symphony Orchesta, Tallinn Chamber Orchestra and others. He has performed in such halls as the Barbican Hall and Wigmore Hall in London, at the Hamburg Musikhalle, the Leipzig Gewandhaus and the Glenn Gould Studio. He has released two CD’s with Schubert and Liszt (1998 Abbas Records, 2002 Arktos) and a CD of Eduard Tubin’s violin music with Sigrid Kuulmann-Martin (ERP 2009). Marko Martin is a sought after soloist and ensemble partner, teaches at the EAMT and is a member of the board of the Estonian Association of Professional musicians. 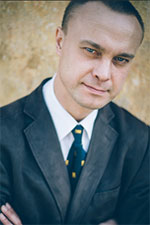