Kristina Kriit grew up in a family of musicians. She began to play the violin at the age of 5. From 1994-2004 she studied at the Estonian Academy of Music and Theatre (EAMT) in Prof. Mari Tampere-Bezrodny’s class, from 2000-2004 in the Master of Arts class. At the same time she extended her knowledge with Professors Igor Bezrodny (1995-97) and Hermann Kienzl (2001-2002).

Kristina Kriit has taken part in several international competitions, the most important of which was the Heino Eller competition in Tallinn (1996), where she won the special prize and the 1997 Henryk Wieniawsk competition in Poland, Lublin.

She has performed as a soloist in Holland, Sweden, Denmark, Germany, Finland and has been twice awarded the scholarship “Holland Music Sessions”. She has taken part in many master classes. Kristina Kriit is currently pursuing her PhD at the EAMT. 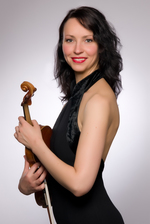