Arete Teemets has studied singing at the Estonian Academy of Music and Theatre (EAMT) with Assoc. Prof. Nadja Kurem and at the Conservatorio di Musica Santa Cecilia with maestra Rebecca Berg obtaining her MA degree with maximum grades. In 2010 she was awarded the First Prize at Santa Chiara Classical Singing Competition in the category of sacred music, winning the Chori Praefecti award. She has also received the Third Prize from the International Opera Singers Competition 2011 in Spoleto (Concorso Comunita’ Europea). In the same year she was awarded with the prize of Premio Via Vittoria which is given to the best singer of Conservatorio di Musica Santa Cecilia. In 2014 Arete Teemets won 1st prize at Concours Flame in Paris. In 2015 she received the Richard Wagner Society Bayreuth Scholarship. In Estonia she has been awarded the PLMF Marje and Kuldar Sink award “Young Singer 2010”.

In 2014 she performed with the renowned Belgian early music ensemble Ausonia with a programme of Rameau’s music at the Abbaye de Saint-Michel en Thiérache Festival (France) and the Tallinn Chamber Music Festival (Estonia), continuing this cooperation in 2015 at the Festival de Musique Ancienne de Ribeauvillé (France) with a programme of Biber-Froberger-Rosenmüller. 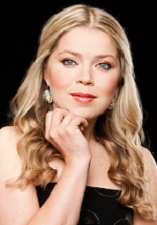